From being fired as an IT technician, selling £60 million worth of watches online, losing a multi million pound court case, to setting up the fastest growing tech company in Europe. CEO Matt Warren tells us why he started Veeqo and what he learnt along the way.

Thirteen years ago, I became an accidental retailer. Other than a brief spell when I was 8 years old, trying to sell pencils I borrowed from my dads office to neighbours, I had no dreams of selling things.

I grew up being a secret geek. Today being a geek is cool but back in the 90’s, it was really not cool. I loved technology, I loved playing computer games and tinkering with my 286 PC to make it go faster.

I started my career as an apprentice IT technician and worked my way up the corporate ladder, eventually leaving to become the first employee of a tech startup in the 1999 boom, before it then went bust. After that, I just went back to working in a normal IT company as a senior programmer.

Then, one day a friend at work said he could get watches cheap. I knew nothing about watches, so my initial instinct was to turn to Google for information and pricing. I was surprised to find nothing. Not only could I not find pricing, but I couldn’t even find the different watch models specs or even photos of what they actually looked like.

It seemed pretty obvious to me then, that I should start selling watches online as no one else was doing it. Nothing happened for weeks, until the company I worked for was under a lot of financial pressure. After having quite a few disagreements with the CEO about how my team was performing, I got fired.

I wasn’t happy at the company but being fired still sucked. I’d always over achieved at work, so I wasn’t used to this feeling. But now I had the time to work on the watch idea and also interview for a few job roles at the same time and ended up getting some good job offers.

I put the offers on ice and built my own custom eCommerce website, designed just for watches. It only took a few days to build, then I boldly called up Rolex and told the lady on the phone that I had a genius idea. I wanted to sell their watches online and I would make us both a fortune.

When she finished laughing at me, I quickly found out that the luxury watch brands deemed the internet as the devil and they would never sell online. So I found some shops in the US that would sell to me indirectly as a messy work around.

I added watches to my new website, even though I had no stock and waited for the orders to roll in. I waited and I waited. Eventually after 3 weeks, I decided that this wasn’t going to work so I signed a contract to work for some huge IT company in London. Then, the next day I got my first order for a £350 Gucci watch. Wahoo!

I bootstrapped the business to a multi-million pound turnover within 12 months and started a 12 year period of my life selling watches online. Over this time, we sold over £60m of watches online, went bust once, sold the company twice and fell through twice, got into a multi-million pound legal battle with watch brands (I lost), raised over £1m in funding, opened multiple bricks and mortar shops in London, acquired another business, become 1st company in the world to be allowed to sell watches online, lost my dad unexpectedly  and eventually successfully sold the business in 2014, ending my selling days with a bang.

I’ve made a lot of mistakes in that time. I found that I actually learnt more from the successes than the failures, which goes against what the business books say, but it’s the success that gives you hope for more success.

I used to love selling in the early days. The buzz of a new order arriving or getting a nice email from a happy customer was the best feeling.

But as we got bigger, it got harder. Responding to customers emails/phone calls, trying to get orders out in time to please customers, getting your suppliers to do what they said they would do, finding enough money to buy all the stock you need to grow the business, screaming at chargeback letters, hoping you don’t oversell,  praying your shipping company will do what they should so you don’t look bad and the list goes on!

As an eCommerce company grows and scales, it moves from shipping 5 orders a day to 200, but still only has the same 7 hours to ship everything. So this means hiring more staff just to complete these tasks. More staff to do this stuff, also still means that no one is dedicating enough time to improving the customer’s experience. I knew if I could automate the shipping process, I could reduce the number of staff I needed and give a bigger cut of time to my customers.

But probably my biggest frustration as a business owner, was wanting the answer to a simple question “Am I making money?” because the fear was, I was working my ass off and selling lots of stuff, but not actually making much profit. We sold through a mixture of different stores such as website, retail stores and Amazon. So to get accurate profit reports we had to log into the different systems, export what we could the best we could, merge it (ha! more like “click and pray”) with our accounts system and try to hack our way to see our profits.

I knew the answer was to find some software so I could see everything in one place and get an instant overview of how I was doing. So I spent months researching, trying and testing all the software out there.

They fell into two categories. They either didn’t work or they did work but you needed to read a 500 page manual to work out how to use it. All I wanted, was something that I could trust to work and be really easy for me and my team to use quickly. I didn’t have the time to learn anything too complicated.

That’s why I sold my eCommerce business and started Veeqo. I believe that selling should be easy and by fulfilling my desire to run a Tech company, I’m also releasing the secret geek inside.

So now two years later at Veeqo, we’re on a mission to make sellers life easier. 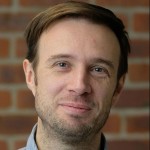